We are developing methods of computing complex phenotypes by writing differential equation models for known developmental and physiological processes and examining how such systems behave under genetic variation. We have shown that the non-linear and non-additive properties of gene-trait relationships result in a variable and context-dependent correlation between genetic variation and phenotypic variation. Alleles that have a major effect on a trait in one genetic background can be without any effect at all in a different genetic background, and the effects of a gene also vary in different environments. This context-dependency of genetic variation provides a mechanistic explanation of the variable expressivity and incomplete penetrance that are common features of the genetics of complex traits.

It is common practice to talk about a distinction between the effects of genes and environments (nature vs nurture, gene-environment interaction), but this is a false dichotomy that arises from the statistical analysis of phenotypic variation. Although it is possible to statistically partition phenotypic variance into components attributable to genetic variation and environmental variation, the result depends entirely on the kind and amount of variation that is present, and has nothing to do with how a phenotype actually comes about. The phenotype is produced by molecular and cellular mechanisms, most of which do not vary from individual to individual and cannot be detected by statistical analysis. The mechanistic causes of the phenotype must be uncovered by experimentation.

Once one looks at actual mechanisms, it becomes clear that no phenotype is due to genes alone. The external environment comes in in many ways: nutrition, micronutrients, temperature, photoperiod, pheromones, social environment, and many more. And the internal environment also plays an critical role: cell-cell signaling, endocrine signaling, ion gradients, membrane potentials, etc.. Our work on polyphenisms and body size regulation illustrates the many ways in which environments play a critical role in defining the phenotype.

Although it is possible to determine exactly how genes and environments affect the processes that lead to the phenotype, it is not possible (nor does it make any sense) to say that one or another part or aspect of the phenotype is due to either genes or environment.

>The only way to get a functional understanding of the causes of the phenotype is to know the underlying molecular and developmental mechanisms. Because of the complexity and non-linearity of the mechanisms, it is not possible to understand them by thought experiments. What is needed is a mathematical description of the processes, which can then be used to solve the phenotype by computer simulation.

There are few developmental systems that are understood well enough, quantitatively, to lend themselves to mathematical description without black-boxing things, or without making a lot of guesses at parameter values. Hence we have decided to focus on metabolic networks of biomedical importance. Many of these are extremely well understood, and, unlike development, there is lots of literature on kinetics and quantification. We’ve worked extensively on one-carbon metabolism (pathway below), which, via thymidylate synthase, provides the rate-limiting step for DNA synthesis, and which contains a host of methylation reactions (including DNA and histone methylation), and also has glutathione as one of its outputs. Genetic and environmental effects in this pathway are well known and contribute to developmental defects (spina bifida), cardiovascular disease, cancer and oxidative stress. We have a web page dedicated to these studies. More recently we’ve been modeling dopamine and serotonin synthesis, release and reuptake and use this to study Parkinsonism and the kinetics and effects of SSRIs. These metabolic networks give us a natural way to include genetic (enzymes are gene products) and environmental (nutrients, vitamins) factors.

Out models allow us to trace the exact pathway by which a mutation causes a change in, say, DNA synthesis without affecting DNA methylation, or why a mutation in one gene has an effect only under certain nutritional conditions and not others, or why two mutations sometimes (but not necessarily) have a bigger (or lesser) effect than either mutation alone. Perhaps the most interesting thing to come out of this work is the finding that there are multiple and diverse homeostatic mechanisms at work in these networks that give them robustness against genetic and environmental insults. Robustness has heretofore been treated primarily from a theoretical perspective, but in these systems we can see how specific robustness mechanisms actually operate. 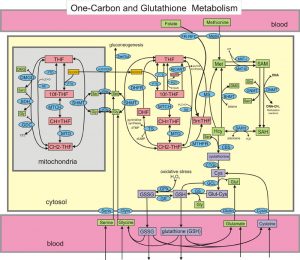 This is a diagram of our current model of one-carbon metabolism. Ellipses are enzymes and boxes are metabolites. The mathematical model cojsist of a large numkber of coupled differential euqations, one for each metabolite, and kinetic equations for each of the enzymes that also contain terms for the allosteric interactions (not shown in the diagram) that provide regulatry control.

Veitia, R. and Nijhout, H.F. 2006. The robustness of the transcriptional response to alterations in morphogenetic gradients. BioEssays 28: 282-289.

Theme by Anders Noren — Up ↑